The Kenai River is a meltwater river, meaning its water levels and color are directly related to the freezing and thawing of a massive glacial cap known as the Harding Ice Field. This glacial cap runs the entire Eastern side of the Kenai Peninsula and has four major glacier tributaries that feed the Kenai River System. 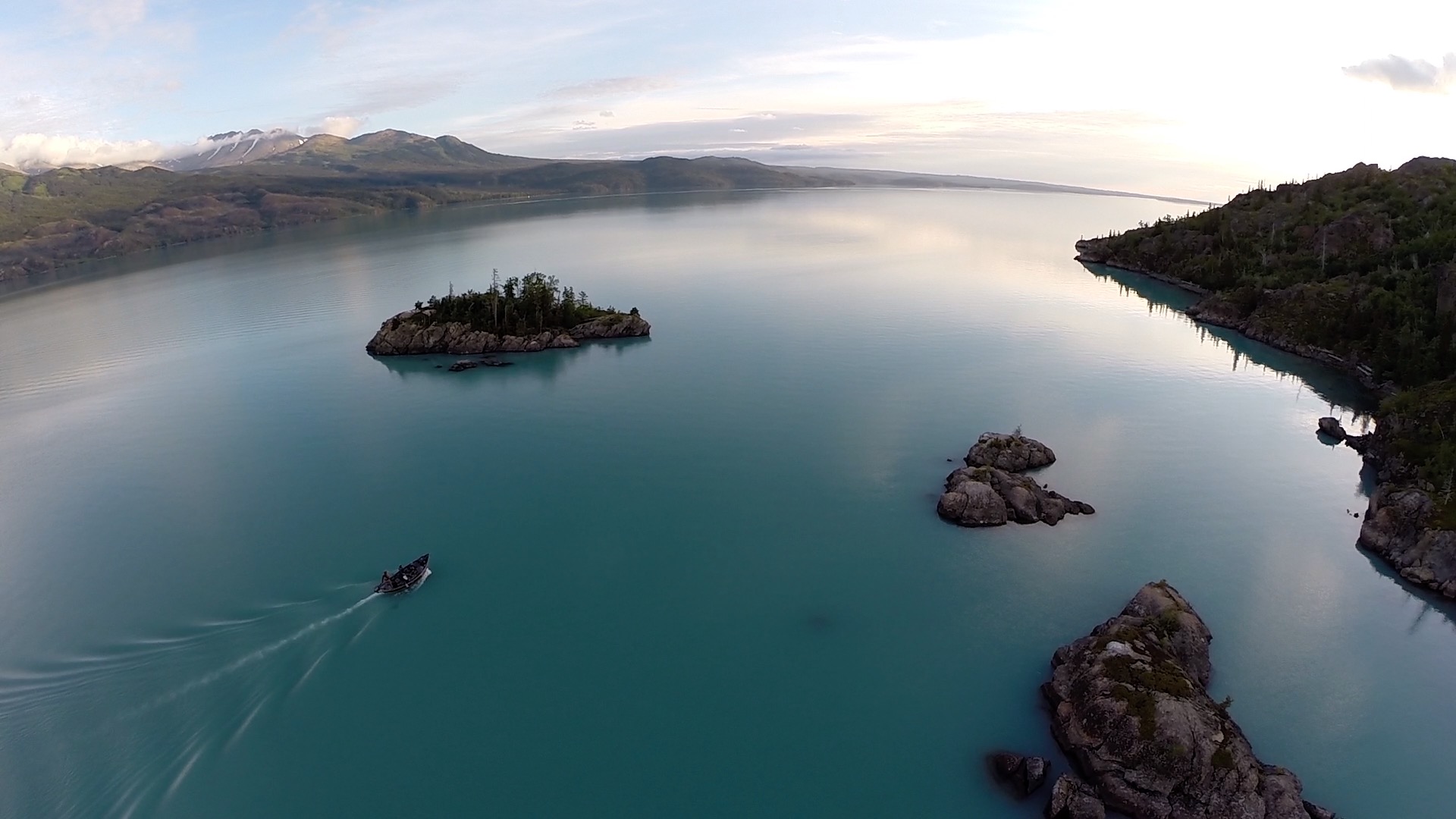 The Kenai River begins its 81 mile course out of the massive, glacial Kenai Lake, located in the heart of the Kenai Mountain Range. The river runs its moderate descent for 17 miles through the breath taking Cooper Landing Valley and Kenai National Wildlife Refuge before draining into another glacial lake called Skilak. This section of the river between the lakes is reffered to as the Upper Kenai River and is world renowned for its Rainbow Trout, Charr, and Salmon fishing. It is a “Drift Only” section of river and is accsessed by several State and Federal boat launches throughout its course. Most anglers utilize 16-20ft Drift boats and rafts to float and fish the Upper Kenai, however there are lots of great spots to park and walk into as the Sterling Highway parallels a majority of the Upper River. Walk-In fishing can be limited depending on the time of year and river levels. 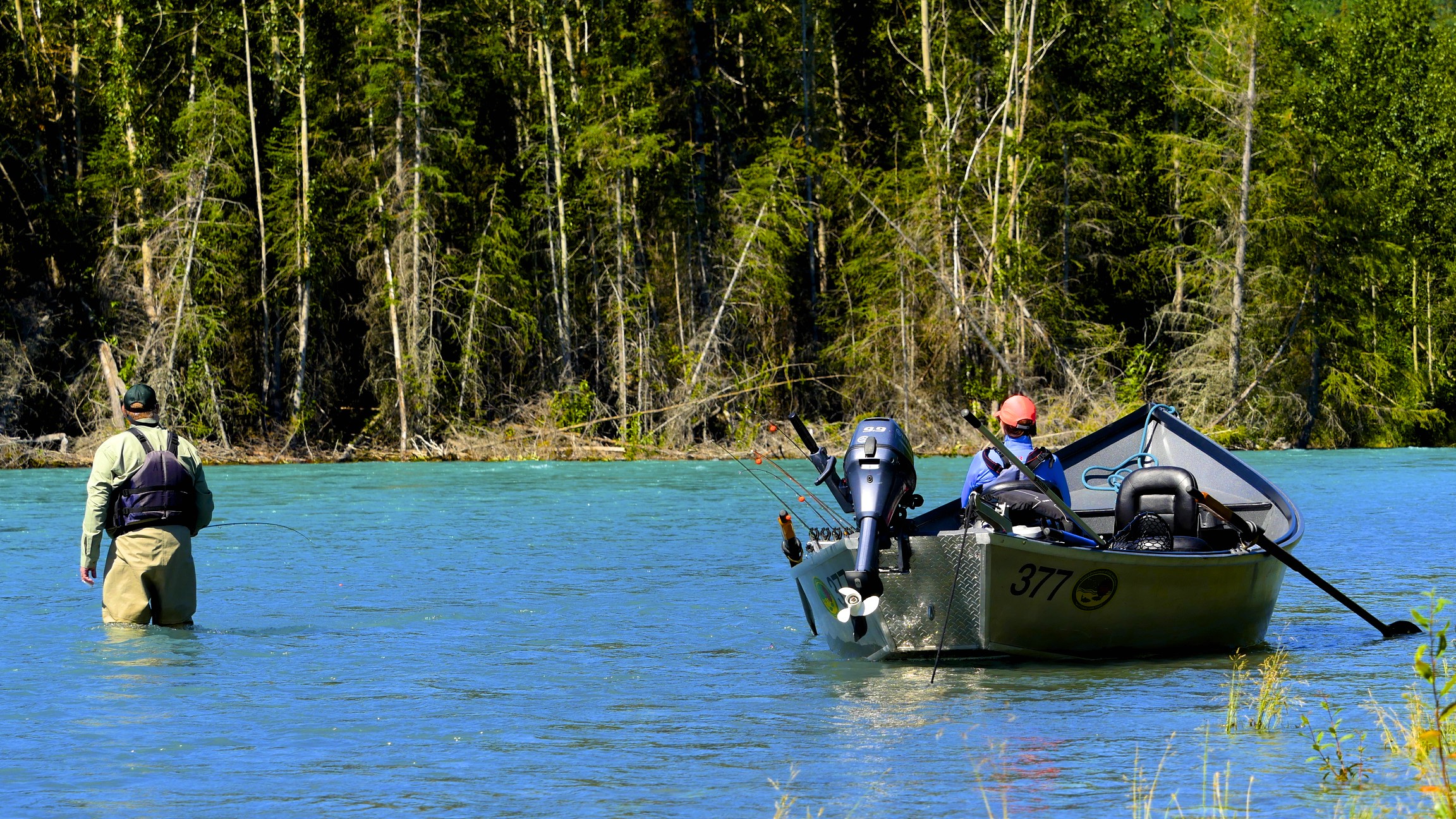 Below Skilak Lake, the Kenai slowly winds its way west before entering into a gorge called Naptowne Rapids. This section of river is referred to as the Middle Kenai River and produces excellent Trout and Salmon fishing throughout the season. Outboard motor use is allowed on the Kenai below Skilak Lake and many anglers make use of River sleds to access and fish this section of the Kenai. There are state and federal boat launch facilities at the outlet of Skilak Lake and before Naptowne 2 Rapids. This is Primarily a boat fishery with wading opurtunities in the early and Late part of the season when river levels are down. Walk-In access is very limited in this section of the Kenai.

The Kenai continues its excellerated descent below Naptown Rapids through the western lowlands of the Kenai Peninsula before teminating into Cook Inlet. Reffered to as the Lower Kenai, this section of River is infamous for it’s world record King Salmon fishery and offers excellent trout fishing oppurtunuties throughout the season when water condtions are prime. 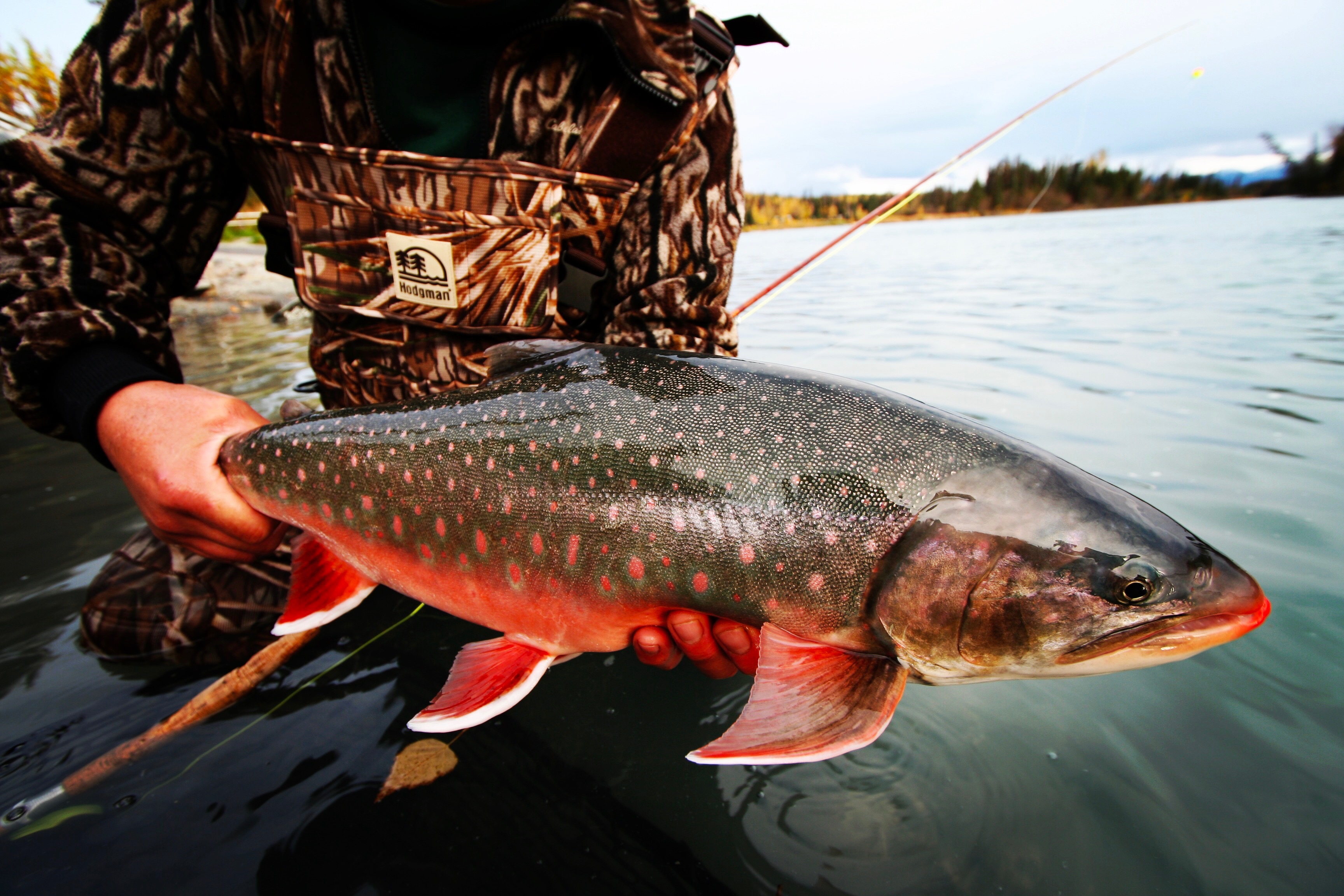 The Kenai can be a very intimidating river to fly fish at first glance. The micro particles of glacial silt from its source refract the sunlight and give the water its vivid turqouise, mint ice cream color hiding the bottom of the river from view and making the water look 10 times deeper than it really is. In reality, the river is fairly shallow and fly fishing is extremely effective because of this natural camoflage between the angler and the fish. Long casts and pin-point accuracy are not needed to be successful, making the Kenai River a great place for anglers new to the sport. 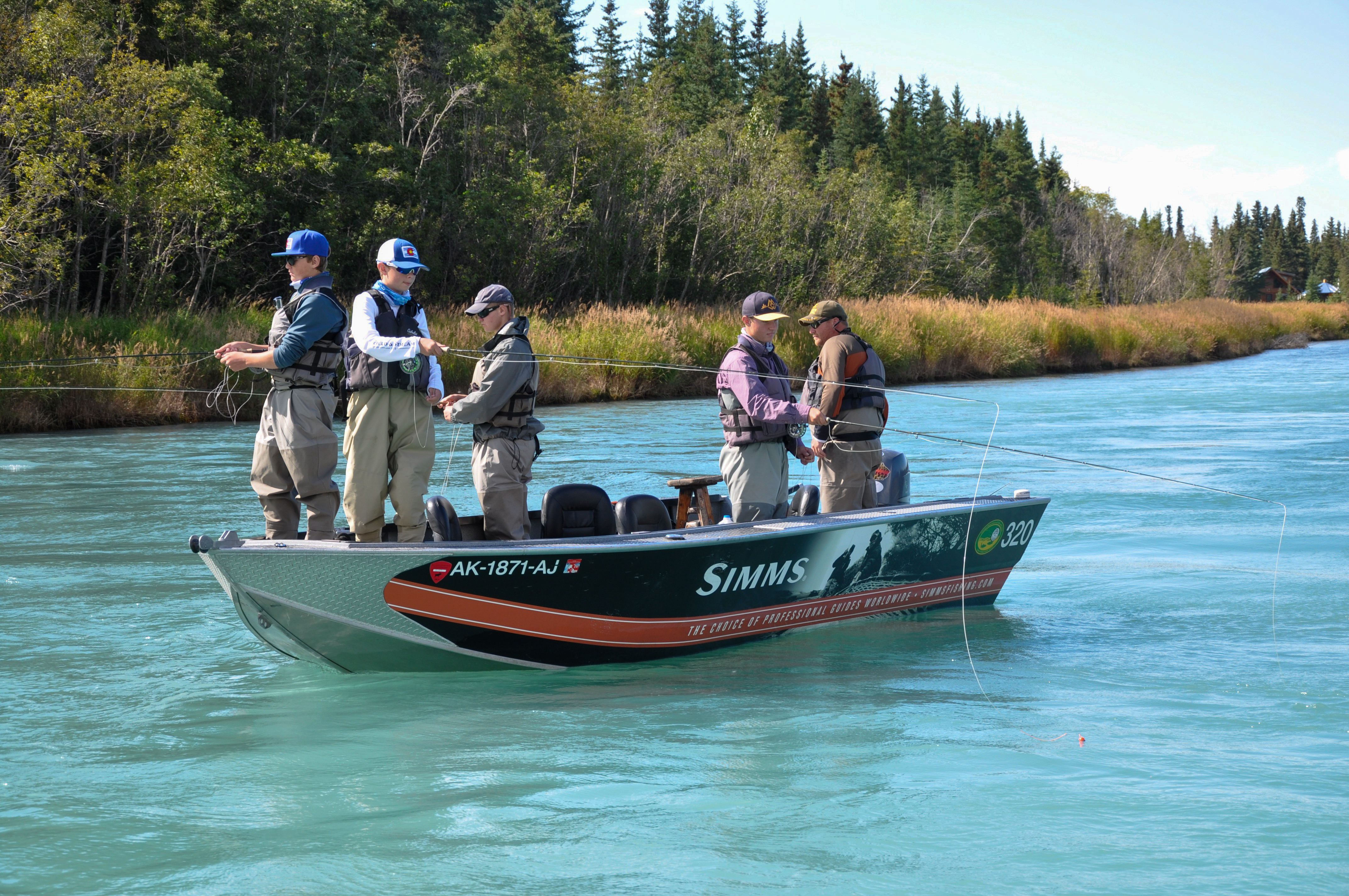 Trout fishing begins on the Kenai on June 11th of every season and remains open until May 1st.( From May 1st through June 11th, The entire Upper Kenai and it’s Tributaries including the first 5 miles below Skilak Lake are closed to sport fishing to protect its native Rainbow Trout during the peak of their spawning season.) The trout fishing during the first half of the season is incredible and many different techniques can be utilized with great success. 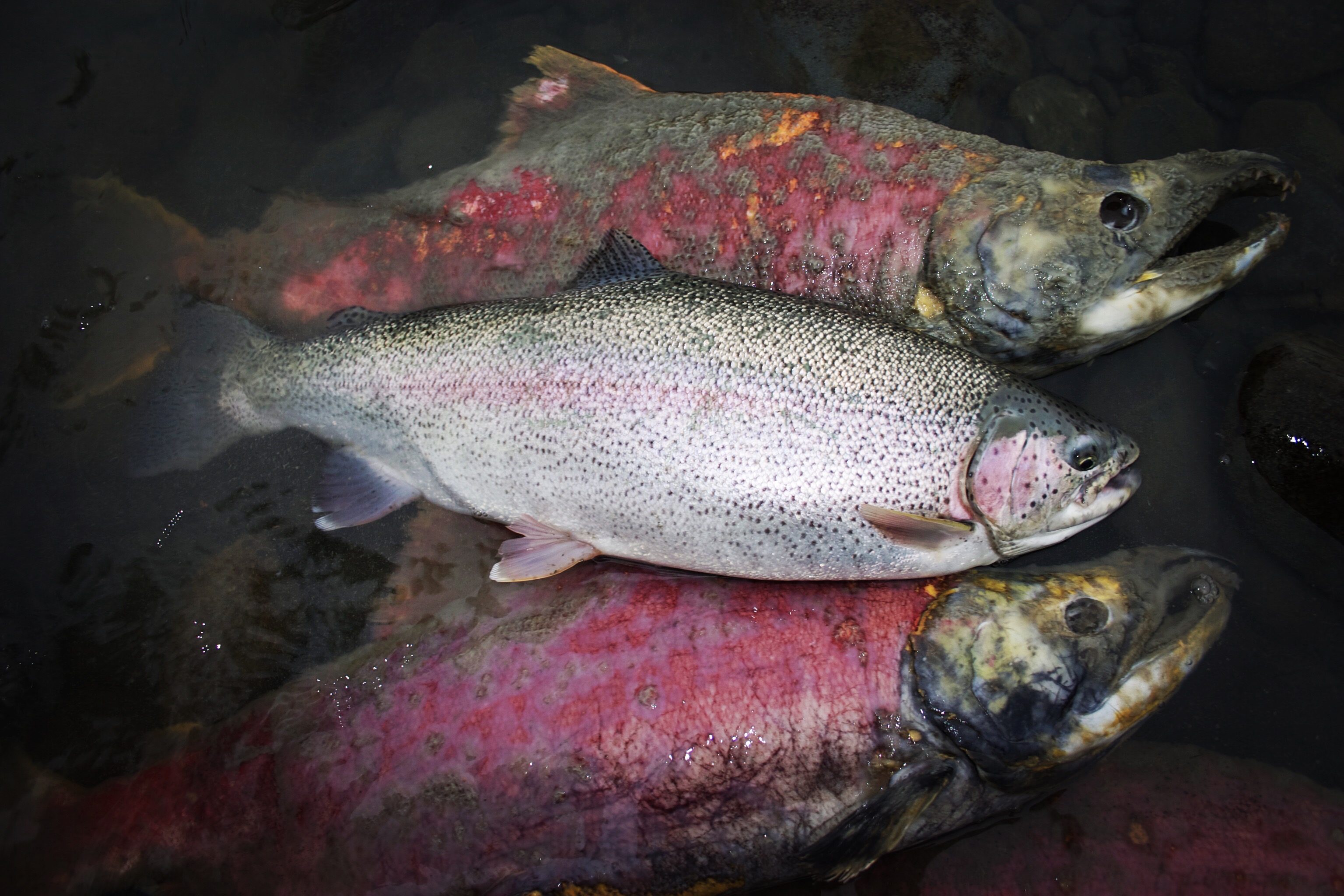 The most popular method of fly fishing the Kenai is a strike indicator nymphing setup with an egg pattern or flesh fly. Each year, millions of Pacific Salmon return to spawn and die in the Kenai River creating a massive food source in addition to the prolific aquatic insects and baitfish. Salmon eggs and flesh are a major year round food source for Kenai river trout and rarely get passed up. The most popular egg pattens these days are plastic beads that have been painted and sized up to match the particular specie and life stages of the egg. It is the Alaska version of “matching the hatch” and is critical to your success. Perfect “dead drift” presentations are critical when egg fishing on the Kenai, and anglers that have mastered this do extremely well. 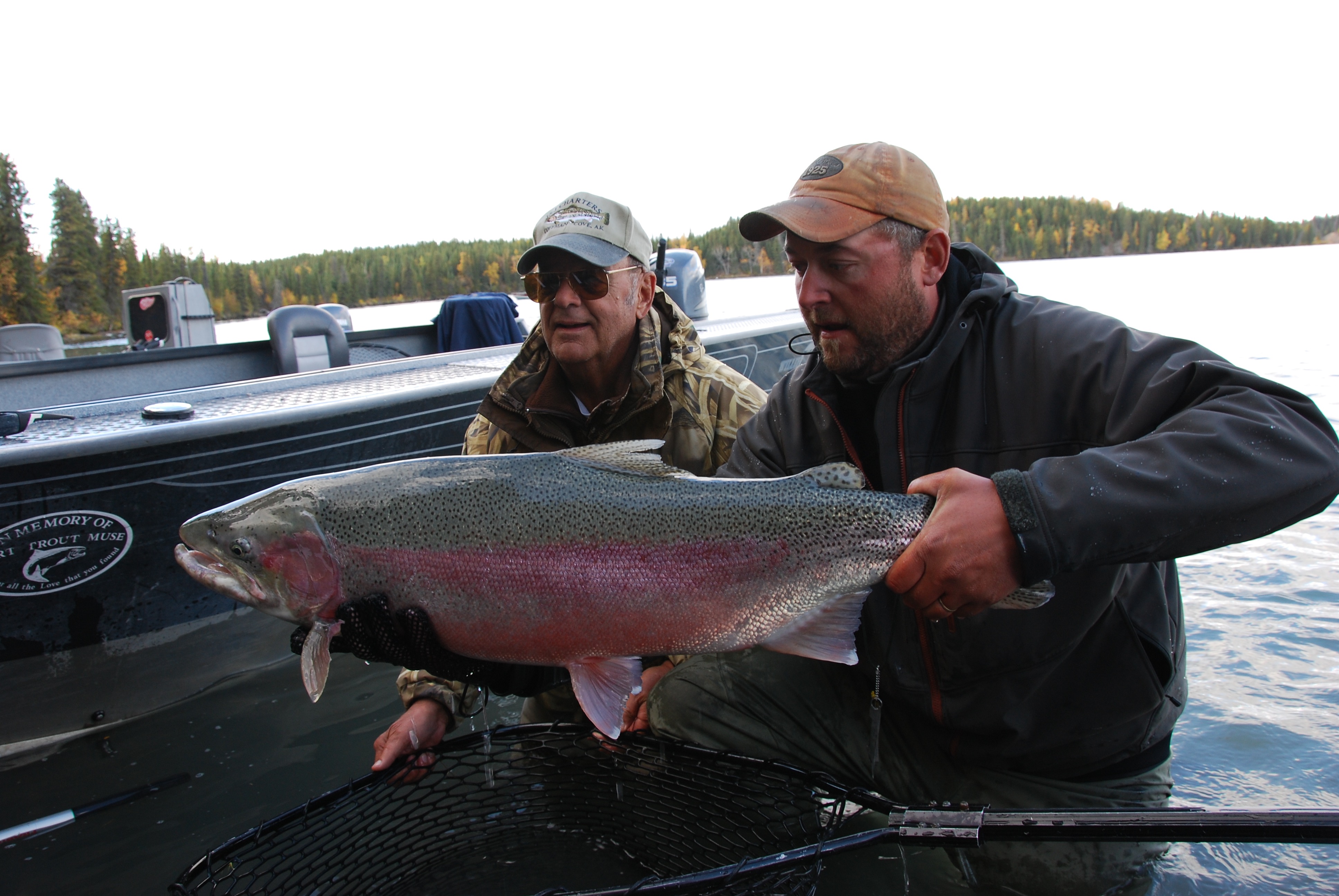 Flesh flies imitate the various stages of Salmon flesh in the river. During the first part of the season (June – August) salmon are making their migration up the Kenai to their spawning grounds and are being intercepted by hundreds of salmon anglers along the river. Bright red and orange flesh flies that imitate fresh Salmon just caught, cleaned, and discarded back into the river can be deadly. Trout will key in on the particles of meat that break off the fresh carcasses as they drift downriver. All Pacific Salmon die after they spawn. In the late part of the season (Mid September- November), dead salmon stack up everywhere along the river and provide a mega food source for the entire Kenai River ecosystem. Flesh flies in gray, brown, white and yellow better imitate the rotting stages of the salmon meat and can produce some huge results. 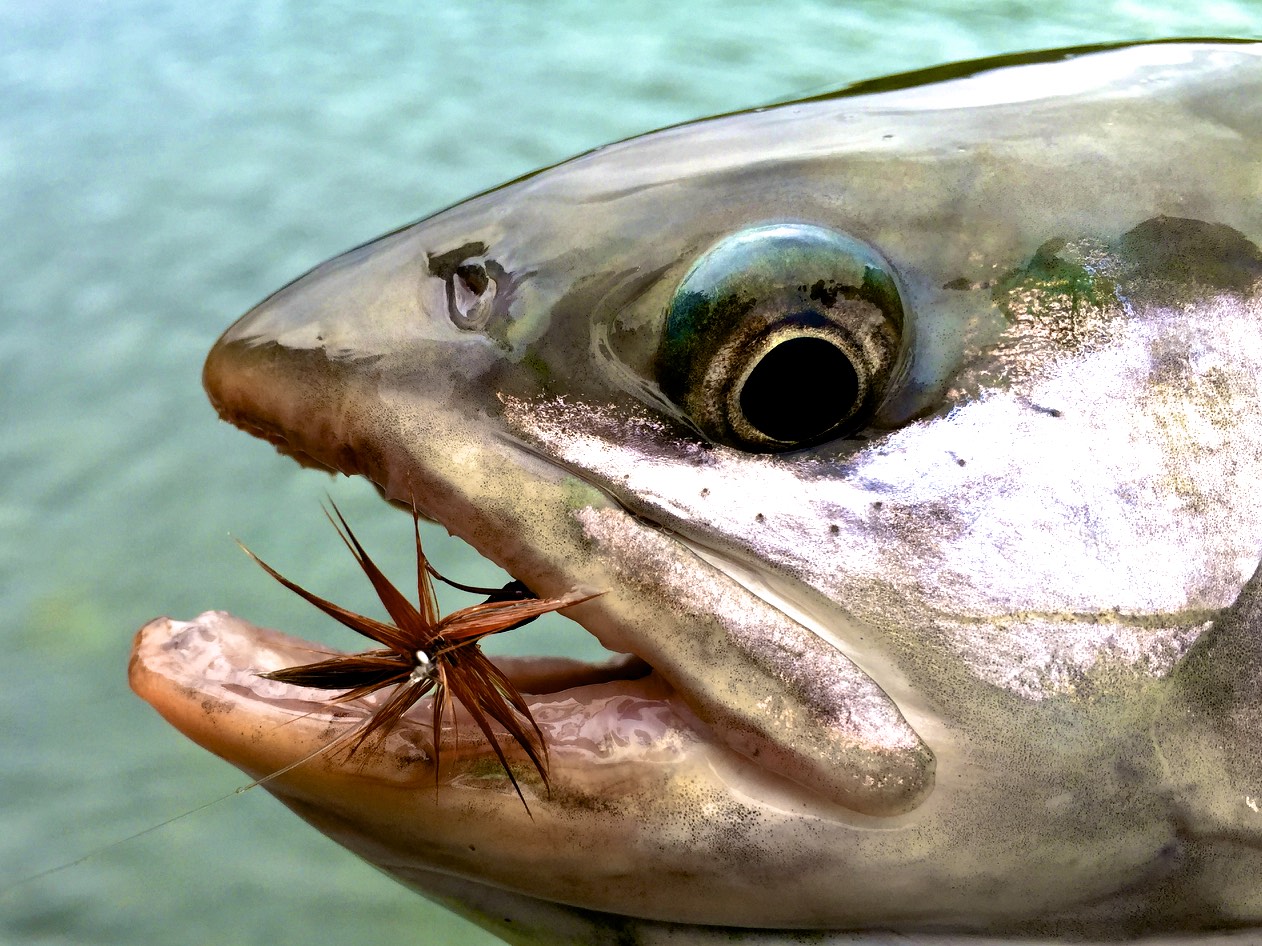 Swinging sculpin and leech patterns during the first and last part of the season is also very effective. Three to six inch flies in black, brown, and olive are deadly and can produce some great strikes when nothing else is working. Spey and Switch rods have become extremely popular for this on the Kenai in the 5-6 weight range.

Nymph and Dry Fly Fishing can be can be very productive on the Kenai during certain times of the season.The Kenai has prolific mayfly, caddis, midge, and stonefly hatches, but are often ignored by the larger trout because of other high energy food sources in the river such as salmon flesh and eggs. When these food sources become scarce, the bigger trout start looking for bugs. Parachute style dry flies such as the Adams and Hare’s Ear in sizes 10-12 can get lots of attention, as well as various caddis adult and emerger patterns in sizes 14-16. Nymph fisherman dead drifting and swinging bead head Prince, PT’s, and Hare’s Ear nymphs are rarely disappointed during these time periods. 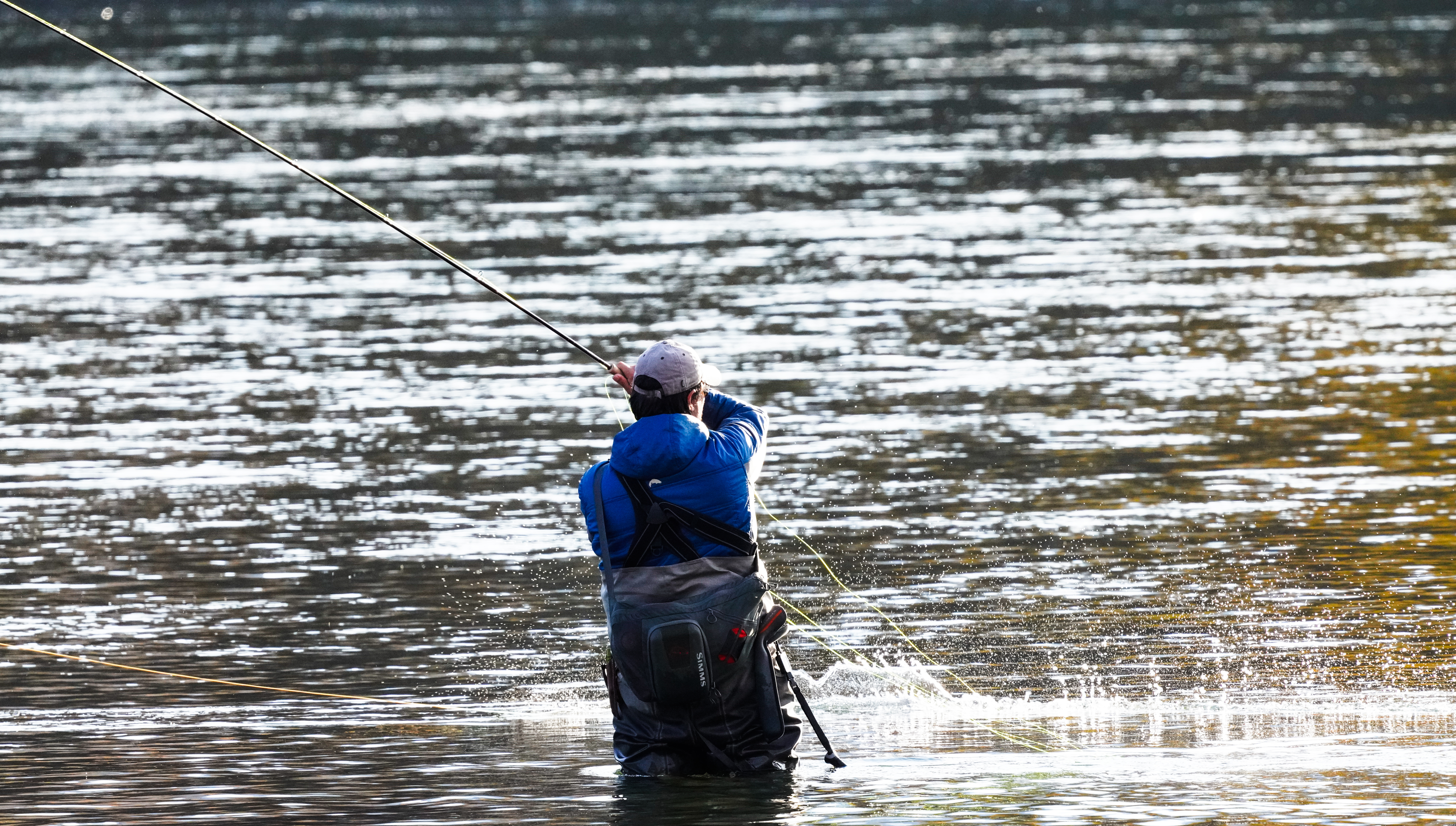 Equipment- Ten foot six to seven weight single hand rods are ideal for fishing the Kenai. The ten foot length allows you to better manage 10-12 foot leaders and gives you great line control when dead drifting egg patterns and flesh flies on a strike indicator set up. Floating fly lines designed to cast strike indicators and split shot will serve you well on the Kenai. Fluorocarbon tippets in the 8-12 pound class are ideal.

Spey and Switch rods in the 5 and 6 weight range are very popular for swinging sculpin and leech patterns. Skagit set ups with various sink tips of T7 to T11 will put you in the game.

Back to the Guided Fishing page